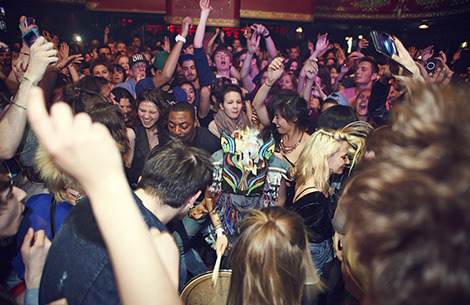 ► XXYYXX : is the name of the 17 year old producer, Marcel Everett. Working out of his bedroom in Orlando, Florida, Marcel creates beautiful and harmonious experimental, lo-fi music with self-made synthesisers and computer software.

Even at such a young age, he has already had huge success, with his music video for ‘About You’, directed by Jeffrey Vashhaving over 6 million views on YouTube. He’s also done remixes for Tinashe and Usher.

Everett describes his music as « Doing drugs on a freeway … underwater.”

► BLACKBIRD BLACKBIRD: is the alias of San Francisco based MikeyMaramag.

His unique style of dreamy folktronica takes influences from all ends of the musical spectrum, from hypnotic, psychedelic pop to organic sounds and ghostly vocals.

► SALVA : PAUL SALVA is a renowned producer, DJ and owner of the revered FriteNitelabel.Salvahas created exclusive mixes for Mary Anne Hobbs, The FADER, and XLR8R, as well as remixing the likes of Miguel Migs, Glitch Mob, Rainbow Arabia, Om Unit and others.

He dropped one of 2012′s biggest tracks, a collaborative remix of Kanye West’s ‘Mercy’ that not only reached #1 on Soundcloud, but also received spins on various US radio stations.

► SLOW MAGIC : is the sound made by an unknown imaginary friend. Making music, while staying anonymous in the age of the internet is not only difficult but also a lot of fun for SLOW MAGIC.

Recognised by only a handmade colourful mask, SLOW MAGIC is just that. Airy synths and looping echoey vocals, mysterious in every way apart from the music.

Slow magic released debut album ‘▲’ in April 2012, followed up by single ‘On Yr Side’ in September.

► GIRAFFAGE : is San Francisco based Charlie Yin. His sample-based pop music is blissful, dreamy, and filled with glitchy effects, unusual drums and completed with his beautiful vocals.

He released his first EP, ‘Pretty Things’ in May 2011 followed by album ‘Comfort’ later on in the year.

► MT. WOLF : are a British four-piece from South London.

So far they have caused quite a stir within the music press with the release of their debut EP ‘Life Size Ghosts’ in October 2012.

Christian has been active for a long time as a producer, singer and DJ, releasing two mini-EP’s as The Quietboy back in 2007. With Niva he reinvented himself and as well as his own material, has done remixes for BLACKBIRD BLACKBIRD, PALPITATION AND JONATHAN JOHANSSON.

The debut EP, ‘Feverish Dreams’, was released on the London label Something In Construction.

► MOLO : is the new electronic duo born out of the collaboration between London based producers (Marc dos Santos David) and Super Class (Sylvester Meighan).

Together they create an exciting mix of organic beats and classically influenced melodic experimentation, often emphasised by the magical and haunting vocals of indie artist CATARINA MORENO.

Their debut EP will be released in the upcoming months on Birth Records.